“Lirica sul Tevere” is an International Opera Competition which aims to give young singers the opportunity to perform in the presence of the greatest exponents of opera and the Artistic Directors of national and international Opera Institutions.
The Third Edition of the Competition, tribute to the great soprano DANIELA DESSÌ, is included in the program of the first edition of the "LIRICA SUL TEVERE" CITTÀ DI ORTE OPERA FESTIVAL, tribute to Maestro LUCIANO PAVAROTTI, and it is confirmed to be an appointment with an international character which will keep repeating every year in July.
The Competition, as in previous editions, has two sections: one for vocal register and one for opera roles. Each year will be represented the Operas performed by the winners of the previous edition's competition; for 2021 are expected: “La Traviata” by Giuseppe Verdi, “The Barber of Seville” by Gioacchino Rossini, “ Die Lustigem Witwe ” by Franz Lehar.
The Commission of the Third Edition of the Competition is composed of three great names of bel canto: the soprano Renata Scotto (President of the Commission), the tenor Fabio Armiliato, the bass Carlo Colombara; it also includes: the Conductor at Filarmonica Orchestra of Seul Carlo Palleschi, the President of Fondazione Luciano Pavarotti Nicoletta Mantovani Pavarotti, the Conductor and Artistic Director at Macedonian Opera and Ballet Bisera Ĉadlovska, the President of Solopera Company and at Korea Opera Association Lee Soyoung, the Artistic Director at Korea Art Management Sun Kim, the Rhegium at Opera Musica Festival – Teatro Cilea Domenico Gatto, the Director at Fondazione Teatro Coccia Novara Corinne Baroni, the Director – Autor – Conductor at Rai “La Barcaccia” Enrico Stinchelli, the Director at Rai “Prima della Prima” Roberto Giannarelli.
The project was born from the idea of the Artistic Director Sandro Corelli, President of the “Lirica sul Tevere” Cultural Association, and it is possible thanks to his and his staff's dedication, the support of the institutions, and the economic support of all the companies that consider an opportunity for the territory and for their return in terms of image to sponsor this great event that continues to give prestige and visibility to the city, actualize its potential to rise to a new cultural pole and point of reference in central Italy and especially in Tuscia 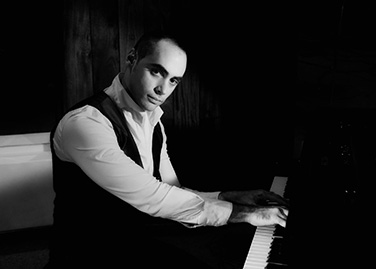 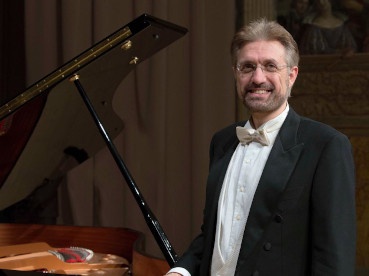 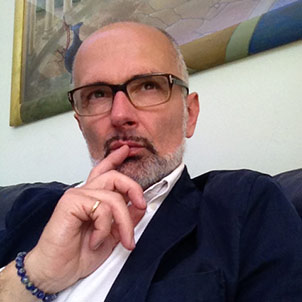 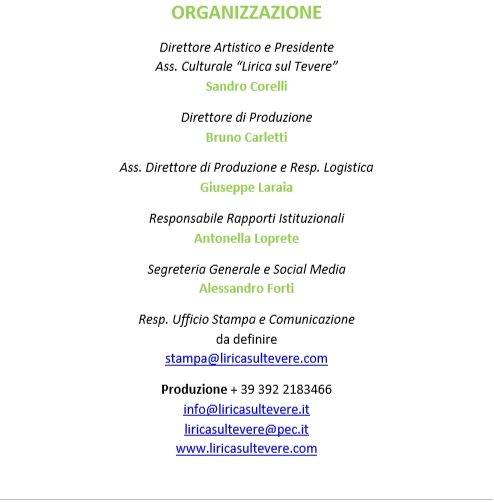